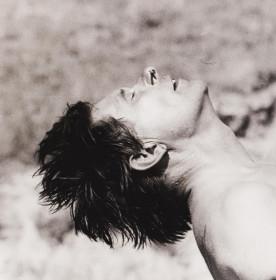 The 2017 Body Piercing Archive exhibit at the Association of Professional Piercers annual Conference & Exposition in Las Vegas will feature the life’s work of the photographer and videographer Charles Gatewood. With over 250,000 images spanning more than 50 years, almost all of you are aware of his prolific work, whether you realize it or not. 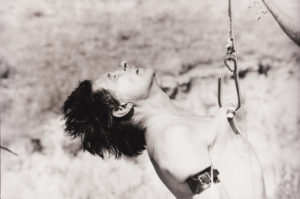 Like most people, I was aware of his work long before I met him. It was in a bookstore in Long Beach, California in 1989, I first saw his photographs of Fakir Musafar’s O-kee-pa suspension and Jim Ward’s Sundance pull in Modern Primitives. Most are unaware that the book’s direction was largely influenced by Charles Gatewood’s contacts provided to V. Vale and Andrea Juno of ReSearch. Although I never personally identified as a “modern primitive,” the book formalized my desire for complete tattoo body coverage with coherent and graphic themes. This book’s influence cannot be overstated; it took fringe individuals and small communities and cohered them into a global movement with a far-reaching cultural impact.

Despite the inseparable association with Modern Primitives, these powerful ritual images of Fakir and Jim Ward were not created for the book. These were documentation from an earlier important film collaboration. The film Dances Sacred and Profane (a.k.a. Bizarre Rituals) was released in 1985. Originally, the documentary was to be focused on Charles Gatewood. However, in the process of making Dances Sacred and Profane, the film became much more a documentation of and promotion for Fakir Musafar. The 2003 film Forbidden Photographs is much more representative of Gatewood’s work and story.

Arguably, the photograph Charles took of Bob Dylan on tour in Sweden in 1966 was his most important. This photo showed Charles he could make money off of his photography. In fact, he continued to make many thousands of dollars in licensing from that single Dylan image over the next fifty years! The photo also opened doors. From this single image, Charles eventually became a staff photographer for Rolling Stone Magazine and made many contributions from 1972 through 1975. He photographed numerous celebrities including: Bob Dylan, David Bowie, Sly and the Family Stone, Carlos Santana, Alice Cooper, Liza Minnelli, Slade, Joan Baez, Stiv Bators and the Dead Boys, Al Green, Ella Fitzgerald, The Hermits, Helen Wheels, Quentin Crisp, Abbie Hoffman, Allen Ginsberg, William Burroughs, Jimmy Page, Robert Palmer, Brian Gysin, Nelson Rockefeller, etc. and he even landed a cover with Rod Stewart. Many of his photos reached iconic status, however, they usually did so without his name being associated with the image. 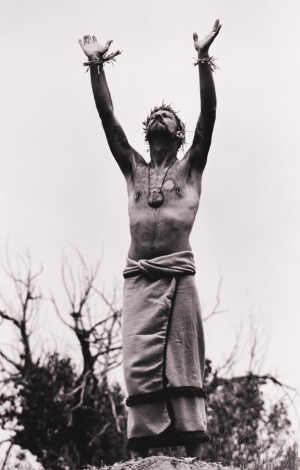 Copy of Jim Ward Does the Sundance Ritual at Devil_s Tower, Wyoming 1982 photo by CG from PK private collection

In the late 1970s, Gatewood’s friendships with the tattooist Spider Webb and porn star Annie Sprinkle propelled him into the world of fetish and body art. Both of these wild personalities opened Gatewood’s eyes, further fueling his passion for sexual kink, that at that place and time very much included tattooing and body piercing. Spider and Charles had several tattoo book collaborations and even created a book proposal in the 1980s for the next big trend – “body piercing” – that was rejected by all the publishing houses as ridiculous. Of course, they were ahead of the times. It was through Annie Sprinkle that Charles met Fakir Musafar and Jim Ward.

In 1984, Charles Gatewood published Wall Street, a book very uncharacteristic of his salacious and shocking subjects. This political photographic essay juxtaposes architecture against humans circulating the economic heart center of capitalism located in lower Manhattan. For Charles, the decade spent wandering the streets in the daytime capturing images of pedestrians and concrete angles was meditative, even therapeutic. These lone journeys offered some balance to the characters and experiences found in seedy bars, dark dungeons, and shooting galleries of the night. The wild success of the book gained Gatewood greater critical acclaim and prestigious awards as well as future book deals, exhibitions, and lecture opportunities.

In 1990, I was hanging out with Gauntlet piercers Dan Kopka and Elayne Angel at their condo in West Hollywood. One of them popped in an underground video. I still remember the grainy interview of a punk guy with a lip ring. At that time, such images were extremely rare and exciting stuff! Charles Gatewood’s videos will never be remembered for their crude production value, but rather for the rarity of the footage. Charles’ first piercing video, in 1986, Erotic Tattooing and Body Piercing, included a Jim Ward lecture in NYC. Upon release, Charles found there was a lucrative home video market. 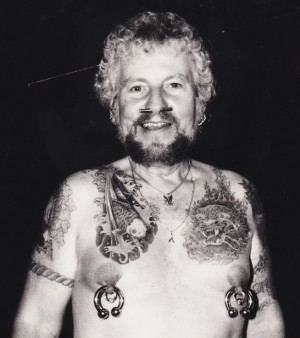 Full disclosure, although I had met Charles several times in the 1990s, I was not friendly towards him. At best I was indifferent, but often I was dismissive. In my twenties, I had a very low opinion of fetish photographers. I would see my friends poorly compensated for their modeling and then their images would unknowingly get turned into greeting cards or plastered on buses as advertisement for STD treatment! I viewed fetish and body art photographers as sexual predators and economic exploiters of my community and friends.

However, during one of my countless used bookstore searches for piercing history in the early 2000s, I stumbled upon Charles Gatewood’s fine art photography book Sidetripping from 1975. My mind was blown! All my preconceptions of who Charles Gatewood was as a person and an artist were challenged. This astonishing work rivaled that of my favorite photographer Diane Arbus, except Gatewood’s book was also in collaboration with William Burroughs, a tremendous writer that greatly influenced me in my younger life! A life lesson learned, I reached out to Charles.

He invited me into his home. We had a casual friendship, I would see him maybe four to six times a year and always one on one. He’d make us tea, show me his latest art projects, we’d catch up on news. I’d dig for history lessons and he’d usually sell me something, or at least try to!

We shared the experience of having degrees in anthropology. Something that became apparent to me was at a public level his degree in anthropology was often toted as a strategy to contextualize and legitimize his work, however, his motivations and methods would be viewed as highly problematic by today’s rigorous academic standards. Charles was an experience junkie. He craved thrills and excitement. In his own words, he was a “gonzo-journalist.” He wanted his pictures to go “POW!” 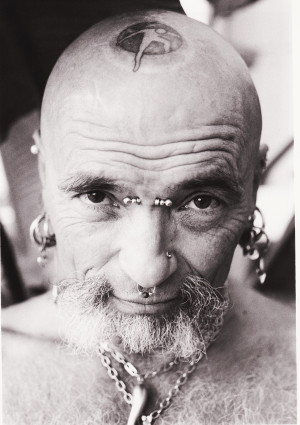 He was a passionate man, whose art and pursuits were driven by his thirst for excitement found in the new, the unusual, and the sexual. The camera lens allowed him access, power and privilege. Photography seduces many subjects and as a recognized photographer the aphrodisiac of the camera grew stronger. Rather than granting permission, models would actively seek him out!

Like an old-time wheelin’ and dealin’ carnival barker, Charles drew in individuals and groups with his fantastic life stories and whispered back door offers of his photographic works at “below gallery prices.” He was a self-made and self-employed artist for 50 years! He prided himself on getting by without ever having to have a real job.

Charles hoarded and thank God for that. His inability to let things go meant he had crates of magazine and newspaper clippings with jokes, photos, pop culture reviews, etc. referencing body piercing and tattooing. Although far from properly preserved, still, he had them while most of us were throwing these ephemera away. Much of the later dated material, he simply donated to the APP/BPA.

Charles grew more familiar with my work and involvement with the APP. We agreed it would be amazing if we could put something together for the 20th anniversary of Modern Primitives. In 2009, Charles and V. Vale of ReSearch gave a well-received presentation at the APP Conference in Las Vegas.

The breadth and quantity of his late 1980s and early 1990s video work is staggering and unique to the body piercing community. He has hundreds of hours of footage that includes Sailor Sid, Jack Yount, Ron Athey, Elayne Angel, Hanky Panky, Allen Falkner, Erl, Annie Sprinkle, Mr. Sebastian, the founders of Body Manipulations, Al D. (yes, the same guy as the APP Scholarship), Raelyn Gallina, and many early Gauntlet piercers, some even before they were piercers. While Charles managed to sell his entire photography archive, including personal journals, to the U.C. Berkeley Bancroft Library, their archivists turned down his video catalog. They could not mentally offset the poor production value and the cost of digitization against the historical importance of these recorded histories. Had the APP Board of Directors not stepped in, much of our shared history would have been lost to the dump! 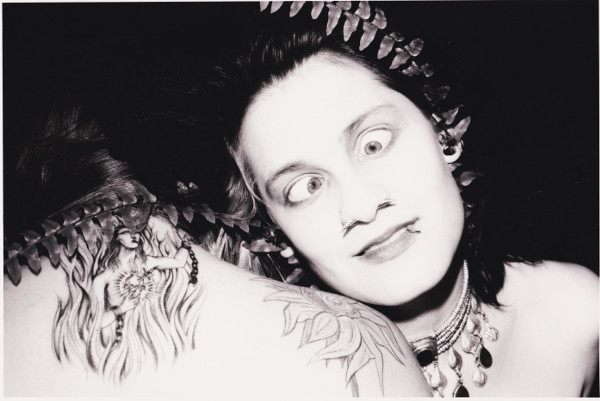 On December 8, 2015, Charles Gatewood donated the Flash Video collection to the APP and Body Piercing Archive (BPA). After he passed away, his estate turned over the remaining personal video archive, including interviews, recorded lectures, b-roll, unedited footage, etc. to the APP and BPA. To date, the APP and BPA have digitized nearly 250 consumer and professional grade tapes!

Charles and I discovered early on that we both had a history with alcohol and had sworn off the bottle decades before. However, Charles suffered from chronic back pain. He turned to prescription opioids and cannabinoids for relief. He started cancelling our rendezvous. Eventually, the opioids took over contributing to a growing depression and organic dementia. I expressed my concerns to him, perhaps too little and too late.

On April 8, 2016, he attempted to take his own life by jumping off his third story apartment balcony. The result was catastrophic injuries putting him in a coma and leading to his death on April 28. He did finally pass in peace, surrounded by folks that loved him. If the details of his death may seem too gruesome, please remember, this is a man that spent his entire career embracing the brutality of life. He would expect no less.

Informative article, despite the author’s naiveté of body modification practices and communities: https://alumni.berkeley.edu/california-magazine/spring-2017-virtue-and-vice/finding-his-tribe-charles-gatewood-bancroft