A Touchy Subject – Protecting yourself and your clients from sexual harassment

You don’t have to be a movie mogul, member of congress, or talk show host to be in dangerous territory when it comes to allegations of sexual misconduct – as a tattoo artist or piercer, by the very hands-on, close quarters, nature of your job, you are in a position of power over your clients, and are therefore at risk for being accused of crossing the line.

It’s fair to assume that most people don’t wake up in the morning thiking, “Let’s see how I can harass someone today!” Yet people DO engage in behavior, even inadvertently, that others see as personally offensive. Simply saying, “I didn’t mean it” will not insulate you from liability. Over the last 25 years, the EEOC (Equal Employment Opportunity Commission), and both federal and state courts have ruled that behavior that is inappropriate or harassing violates the law, even when the intent was purely platonic.

The most fundamental thing you need to know is that sexual harassment is a violation of laws—including Title VII of the Civil Rights Act of 1964—that ban sex discrimination in the workplace.

Harassment is defined as unwelcome verbal, written, or physical conduct that creates a hostile or intimidating work environment. With regard to sexual harassment, there are two types. The first is called “quid pro quo” (a Latin phrase meaning “something for something”). This occurs when an employee is forced to comply with a superior’s sexual demands in order to secure some economic benefit, such as a promotion, pay increase, or continued employment.

The more common type of harassment is defined as a hostile work environment. This is when unwelcome or pervasive conduct has the effect of unreasonably interfering with an individual’s work performance or creates an offensive work environment. The most flagrant examples include behaviors such as harmful or offensive contact, threats, or physical exposure. This type of behavior may also be in violation of criminal law and should be taken very seriously and handled immediately.

Sexual harassment isn’t limited to physicality. It can also involve verbal and nonverbal actions, such as making sexual comments or telling sexual jokes or stories.

As stated earlier, whether the harasser actually intended to create a hostile environment isn’t relevant. What matters is that the victim perceived it as such, and that a reasonable person would, too. As they’ll tell you in court, impact is more important than intent. 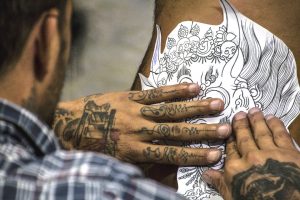 Creating a safe working environment for your fellow artists and staff is important. Tattoo artists and piercers, like healthcare providers, masseurs, and even accountants, have a high responsibility towards protecting their clients from harm. For them, misconduct can occur when the fiduciary aspect of the service provider/client relationship is compromised – fiduciary is a fancy legal term that is applied to a professional in whom a client places his or her trust.

As outlined in the book, “Sexual Abuse By Professionals: A Legal Guide,” because such professionals are in positions of power relative to their clients, the law holds them to a higher standard of behavior. As such, they are accountable for placing the interests of their clients above and before their own.

Though you may not be able to eliminate all of the risks associated with the artist/client dynamic, you can take steps to manage liabilities and practice in a professional manner. Here are some tips:

Going behind closed doors gives a client privacy, but it could also put you at risk for he-said/she-said should any questionable actions occur. Particularly when dealing with a client of the opposite sex, having a “chaperone” in the room – or keeping workspaces in view (but still hidden from public eyes) can protect you both. And NEVER be alone with a client in the studio during or after hours.

Understand diversity within cultures and how this affects sexual boundaries. Different cultures have unique expectations regarding personal space and the parts of their bodies they consider private. Be aware of and accommodating to the needs of ethnic or cultural groups, especially those prevalent in your community.

Always get consent for photography. And with minors, require that a parent be immediately present and not waiting in the lobby even after signing the consent form.

Acceptable Communication— Not only does this mean avoiding distasteful jokes and language, you also should practice clients at ease without appearing inappropriate. Don’t escalate the situation by crossing the border between friendly and flirting. Be professional at all times. You should also communicate honestly with your client if you feel uncomfortable with THEIR behavior.

Use the Grandma Rule – If you would feel uncomfortable telling a joke or acting a certain way in front of your grandma, recognize and stop those inappropriate behaviors in their tracks.