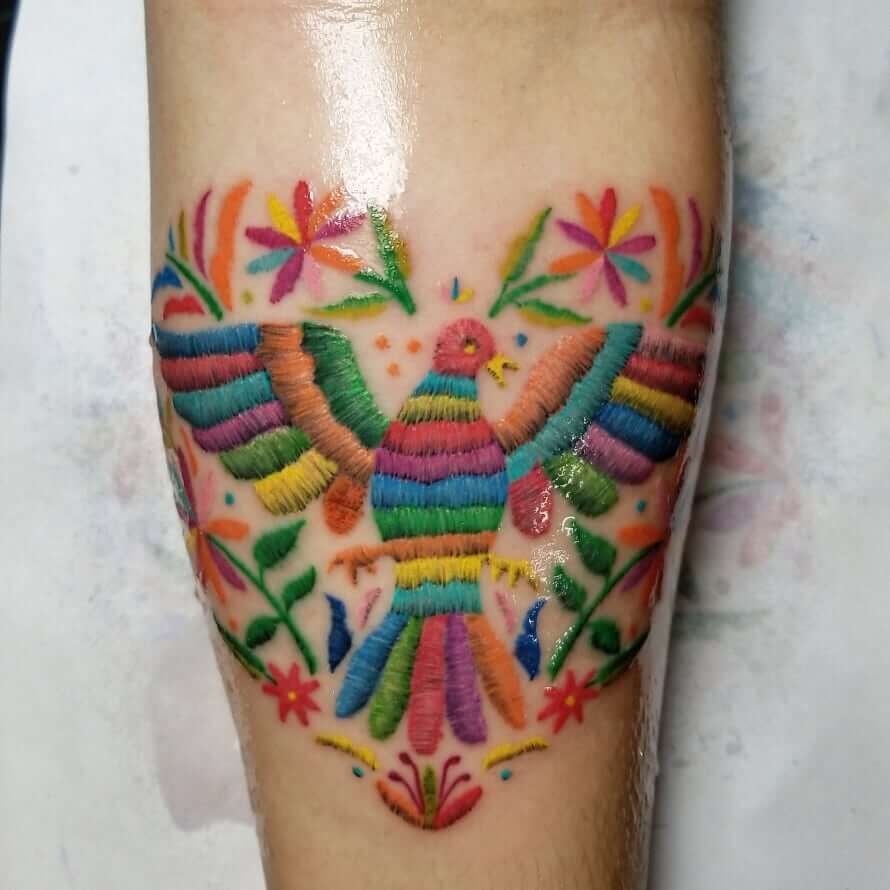 The Rise of Embroidery Tattoos

On March 28th, 2019, tattoo artist, Rogelio Vasquez of Cowboy’s Tattoo in McKinney, Texas posted his day’s work on his Instagram account. There was nothing odd or out of the ordinary about this. It was his nightly ritual; make a client happy by day, post on the ‘Gram by night. It’s more or less what you do if you’re a tattoo artist in the digital era. The ‘out of the ordinary’ aspect of the story began when he awoke the next morning.

“It was crazy,” he recalls. “Hundreds of people were tagging me on Facebook and Instagram. Websites were embedding my post. There were some Mexican celebrities that were sharing it. Just on one page alone, my picture got 50,000 likes.”

The whole thing took him completely by surprise. “For me, it was just another tattoo,” he laughs. “If I had known that this was going to happen, I would have added a watermark or my Instagram account on the picture.”

Nonetheless, the comments and messages poured in, “from all over the world.” He was flooded with appointment requests, most of them not even asking about price or location. “They just kept saying they’d never seen anything like it,” he says.

The piece in discussion was created for a client who had requested an Otomi design. For reference, The Otomi are an indigenous people group inhabiting the Altiplano region of Mexico, who most historians believe were the country’s first inhabitants. Outside the region, they are primarily known for their tenangos—handmade textiles, beautifully embroidered with elaborate designs inspired by nearby cliff paintings, likely created by their ancestors. It is said that a traditional tenango can take anywhere from a few weeks to a few years to complete. Naturally, since he was asked for an Otomi design, Rogelio drew the tattoo to mimic the embroidery pattern of an Otomi textile. In doing this, he unwittingly tapped into a tattoo style that was quickly becoming the latest trend to emerge on social media.

This publication is a trade magazine for the tattoo industry, so if you’re reading this, the concept of embroidery tattoos likely isn’t news to you. But for the sake of the uninitiated who might pick up a copy of this in the foyer of their local parlor, we should elaborate on the concept.

The style is what the name implies: tattoos that are rendered to mimic a work of art created with needle and thread. Sometimes, it’s portrayed as a patch, and sometimes the stitching appears to thread straight into the skin, as is the case with Rogelio’s piece. Several artists have carved impressive niches for themselves with the style and have created some stunning work in the process. Bau Oliver, Russell Van Schaick and Ksu Arrow, are just a few that come to mind. Look them up; they deserve the attention.

What’s particularly striking about the embroidery tattoos, at least from an artist’s point of view, is levels of detail required. You’re not only creating an image; you’re drawing the individual composite threads that make up the image, which requires an entirely new level of shading and texture. According to Rogelio, though, there’s no magic trick. It’s just a matter of wrestling the devil out of the details.

“For me,” he says, “it was like any other tattoo. I started with all solid colors. Then, for the 3D embroidery look, I just did super tiny black lines on the bottom and white lines on the top. That’s the secret.”

We’d be remiss if we didn’t take a moment to mention cross-stitch tattoos as well, as they are often lumped in with the embroideries. It stands to reason; both styles are imitations of textiles and threadwork. However, as far as technique goes, the cross-stitch tattoos are an entirely different animal, made up of a series of tiny “x’s” that come together to form a sort of mosaic image, not unlike a dot matrix printer.

Whether Rogelio’s post triggered the abrupt surge in the style’s popularity, or it just caught the tailwinds of an already emerging trend is the “chicken or the egg” question of the year. What is known, however, is that a mere three weeks after his work went viral, the digital world was suddenly overrun with articles on the topic.

“Embroidery tattoos are now a thing!” proclaimed one website after another, nearly verbatim, and Rogelio’s piece was included in every one of them, often at the top. To be fair, he deserves the accolades. It’s an incredible work of art that stands on its own merit outside of any incoming or outgoing trend. Even more impressive is while, as we’ve already mentioned, there are several artists who have made embroidery tats a specialty, he’s not one of them.

“This is the first embroidery piece that I’ve done,” he reveals. “At the moment, I don’t think I want to do more. I think this was something special for me—and my client. As a tattoo artist you always want to do something unique. But really, I’m a black and gray artist. I love doing portraits and photorealism.”