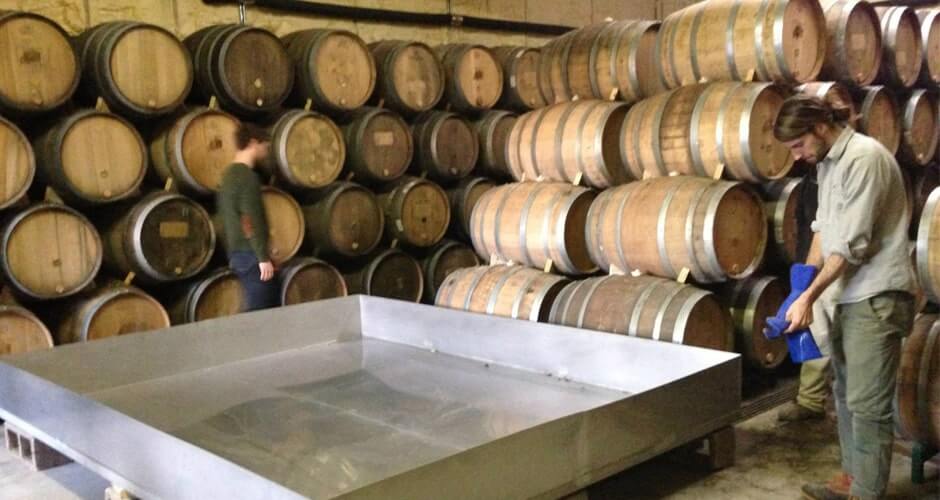 It doesn’t look like much Unlike the tall, gleaming fermenters you have likely seen on a brewery tour, the device consists of a simple metal pan, usually longer than it is wide and only a foot or two deep. No one knows exactly where the coolship originated (there is evidence of shallow, uncovered brewing vessels dating back to at least medieval times), but its practical application is clear to anyone who didn’t sleep through physics in high school.

“I would imagine someone was boiling that liquid a millennium ago, adding spices or hops, and they said, ‘Well, it’s not going to ferment until it cools down,’” says Dan Carey, co-owner and brewmaster of Wisconsin’s coolship-rocking New Glarus Brewing. “And then somebody had the bright idea, ‘Let’s increase the surface area by putting it in a pan.’”

As the years went by and technology advanced, coolships as old-fashioned heat exchangers were no longer necessary. Most modern breweries—adopting the cleanliness-is-next-to-godliness mantra you see in most commercial spaces today—eschewed these shallow pans in favor of more modern refrigeration techniques.

The Belgians realized that, in addition to speeding up the cooling process, these open vessels also exposed wort (the sugary liquid that ferments into beer) to naturally occurring yeasts and bacteria in the atmosphere. While these microorganisms can easily spoil a brew through contamination, they are also capable of producing stunningly complex flavors under the right circumstances. The catch is that you can only control the process so much; mostly, you just have to sit back and let nature take its course.

Cantillon wasn’t first brewery to make spontaneously fermented sour ales, but it may be the best.

It’s hard to pinpoint which brewery first started making spontaneously fermented sour ales, but Cantillon in Brussels is the most commonly cited reference point—both because it’s been around for a while (since 1900), and also because it feels like every U.S. craft brewer interested in wild ales worships at the feet of its tippling, chair-tipping label mascot. Cantillon wasn’t first, but it may be the best.

Jean-Pierre van Roy, Cantillon’s fourth-generation brewer, has owned the Brussels institution since 2011. He says very little has changed in Cantillon’s 114 year history aside from the bottling line, and that time and patience are simply part of the process when it comes to making these carefully crafted sour brews. “We don’t control our fermentation, so some beers could take less than one year to be ready for a blend, and some even two years,” van Roy says. “Patience [is important for brewers considering a coolship] because a brewery has to build its own natural environment, and it takes a lot of time. Love and passion are very important for me, as [they are for] a lot of craft brewers.”

Inspired by forefathers like Cantillon, U.S. breweries have caught coolship fever in recent years. Allagash Brewing Company in Portland, ME is widely cited as the first to set one up for spontaneously fermented sour beers, back in 2008. (Anchor Brewing, it should be noted, has used one for a while, but not to make sours.) Others, like Russian River, Anchorage, New Glarus, and Bluejacket have followed suit in the years since. Their motives vary, from lambic admiration, to a thirst for innovation, to a desire to make beer with a sense of terroir.

Oftentimes, it’s a mix of these and other factors. Denver’s Crooked Stave Artisan Ales was born from a dissertation that owner/brewer Chad Yakobson wrote on a wild yeast called Brettanomyces. (Crooked Stave has a coolship, but hasn’t put it to use yet.) Jester King in Austin, TX incorporates local yeasts from the surrounding Texas Hill Country into its coolship batches. Allagash is experimenting with different blends and aging with cherries and raspberries—a traditional technique used to balance out sourness with natural sweetness from fruit.

These beers, collected under the nebulous umbrella of “American wild ales” by the microbrewing community, are still very much a small niche in an exploding craft scene that for years has been dominated by the arms race to make bigger, hoppier IPAs. But breweries like Boulevard, Surly, The Lost Abbey, and Wicked Weed are taking home Great American Beer Festival medals in various sour-leaning/wild beer categories, and there are more and more events cropping up to celebrate this funky corner of the brew world, like Chicago’s annual Festival of Wood and Barrel Aged Beer and the roving, collaborative bottle-sharing meet-up, Where the Wild Beers Are. All signs point to a continued rise in the production of complex, tart beers in years to come.

In the meantime, the proliferation of coolships around the country is a testament to the mouth-puckering, refreshing appeal of lambics; the maturing craft-beer market, which is looking for a break from hop bombs and imperial stouts; and the enduring influence of old-world breweries like Cantillon. Asked if it’s fulfilling to see this movement happening in the states, van Roy seems pleased, if modest. “Yes, for sure, but I don’t consider it a success for Cantillon itself,” he says. “More as a success for traditional lambic.”