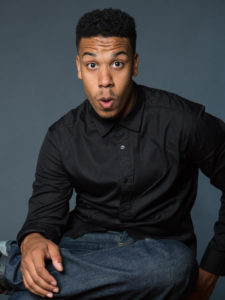 [Editor’s note: These days, Rob Haze is a promising young comedian who lives in Brooklyn and, according to his website, “can be seen on the latest season of Adam Devine’s House Party on Comedy Central and the new Viceland show Flophouse, [and] is cohost of the Kanye West Podcast The Book of Ye.” But back in 2014, he was still living in his native Atlanta and grinding it out every night at clubs in the Peach State capital. He’s come a long way, baby.]

It’s an unseasonably cold November evening at a lousy Old Fourth Ward sports bar where a handful of people, most of them comedians, are watching college football. The place feels oddly out of time, and early aught hits from the likes of Incubus and Dave Matthews Band blare overhead in agreement. There’s going to be comedy here later, but the group of frat boys at the bar doesn’t realize it yet. Nearby, two comics are discussing Hannibal Buress’s recent sold-out show at Buckhead Theatre, and gossiping about local funny people. It’s moments after they start praising Rob Haze that he walks through the door.

An Atlanta-born UGA grad, Haze lived in Orlando during his childhood before returning to the metro area. His jokes are delivered with an easygoing cadence, and they seamlessly range from the topical — gluten, Uber — to the absurd — basketball analogies connecting the audience to his material. He remembers his first brush with humor as a Snaps book his dad got him for Christmas. Think: “yo’ mama” and other irreverent types of insult comedy. After that, it was Chris Rock’s 1996 HBO special, “Bring the Pain.”

Haze kept a steady diet of Comedy Central, “Saturday Night Live,” and Woody Allen movies. He goofed around with friends, but “was never cool enough to make the whole class laugh.” He had comedic aspirations, but people didn’t see his point of view. His sister told him that it was “the worst job you could have, making fun of people.”

His weirdness and persistence has paid off. Haze is now five years into a blossoming career. After showcasing in Los Angeles at NBC talent search “Stand-Up for Diversity” in 2013, he signed with an agent and performed a couple of college tours. 2014 was Haze’s first year doing it on his own.

“[Students] respond really well … when they’re there,” Haze says. “Sometimes, they’ll have me at lunch. No one knows a comedy show is happening, and they’ll just have me in there. I’ll feel like I’m heckling people eating.”

Mostly, his sets go over well, though. He’s a regular at Cloud IX, Star Bar, Laughing Skull Lounge, the Hangar, and Kat’s Cafe. He opened for Dave Chappelle at the Tabernacle in 2013, and averages about seven performances a week. When he goes up at the lousy Old Fourth Ward sports bar, the room changes. The host says, “This next guy is going places.” The frat boys in the back leave the football game for a few minutes. Haze easily gets twice as many laughs as any of the other comedians that night. 2015 seems poised to be a big year.