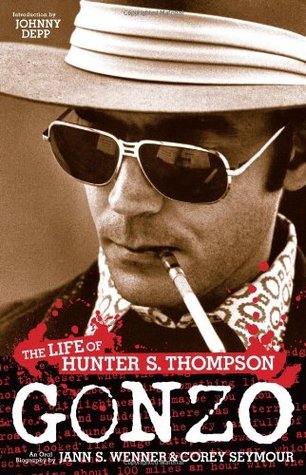 Hunter S. Thompson, to many, is nothing more than a wild-eyed maniac, known as much (if not more) for his intoxicated predilections as his intoxicating verbiage.

But within the man was a multitude. There was the Thompson who mentally annihilated a young assistant, saying, “By the time I was your age I’d written Hell’s Angels; what have you done today?” There was the warmhearted Thompson who brought piles of gifts for the children when visiting old friends. There was the irreverently funny Thompson who delivered by phone his “Christmas greeting” during the season of giving: “This is Santa Claus—ho, ho, ho—I shit down your chimney.” And there was also a much more serious Thompson, at times a hypocritical, jealous, un-amused fellow who’d end a longterm relationship with a woman because she rode on a motorcycle with another man—this while he was sleeping around behind her back.

Two essentially different writers existed in Thompson, too. First was the man who wrote all those brilliant books, and—eventually—the public legend that slowly grew to overshadow the books and his true self.

Gonzo: The Life of Hunter S. Thompson highlights without question the larger-than-life persona. The book chronicles the countless guns used to blow things up, an orange thrown through a plate glass window, all manner of drugs and drink, and celebrities from all walks of life (including Jack Nicholson, Jimmy Buffett, Sean Penn, John Belushi, Paul Oakenfold, Johnny Depp, Jimmy Carter and Marilyn Manson, to name but a few). There’s even a tale of Thompson getting a monkey drunk, before it—shockingly—commits suicide.

At the same time, though, this thorough tome presents many private elements as it touches the essential moments of this iconic author’s life. Covered is Thompson’s youth in Louisville, Ky.; his military stint; his time—and eventually his book—with the Hells Angels; his 1970 campaign for sheriff of Aspen, Colo.; the birth of “Gonzo,” his unhinged, infamously first-person style of journalism; the beginning of Thompson’s political obsession; his near-constant relationship failures; Fear and Loathing in Las Vegas (the book and movie); and all the rest.

Most illuminating, and depressing, is when it becomes clear that Thompson’s Gonzo persona has eclipsed his talent. The writer, in his twilight, continued to exist in high profile, but could barely finish an article. While Thompson aficionados will love this book for its minutiae (one fun fact amongst many: Don Johnson says Thompson “co-created” Nash Bridges with him), newbies will no longer be referred to as such upon finishing Gonzo. This informative oral history turns its readers, regardless of experience, into authorities on Thompson’s life.

And, yes, regardless of how you feel about Thompson after reading of his myriad character flaws and the way he decided to live and end his life, the fact remains that he is one of the most interesting people ever to have put words on a page.

Surely, Rolling Stone publisher Jann Wenner had to cut reams of content from this book, and that’s because, to quote James Carville, “Hunter did something that none of us had the guts to do—he led the kind of life that secretly all of us would like to have had the guts to lead. To hell with the whole thing, just stay drunk and high and smoke and hang out and write outrageous things.”

That he did. Yet before Thompson was a persona, he was a talent. And as his talent began to propel him into the spotlight, he realized that the persona intensified the spotlight to the nth degree, so he continued to exaggerate the character. The problem, of course, is that as he cultivated and furthered the three-ring circus that his body eventually became, he fostered addictions he found impossible to control. As those addictions went from accessories to full-blown, required ensembles, his talent slowly began to move in the opposite direction.

All that’s left now are Thompson’s words, many of them inspired. Instead of wallowing in his passing, readers might take a cue from his myth and celebrate the work.

Thompson himself may have put it best in a conversation with Sandy, long after their divorce. Asked if things had turned out like he wanted, the merry prankster responded, “Well, of course not,” pausing for a long, emphatic look. “But it’s been glamorous.”