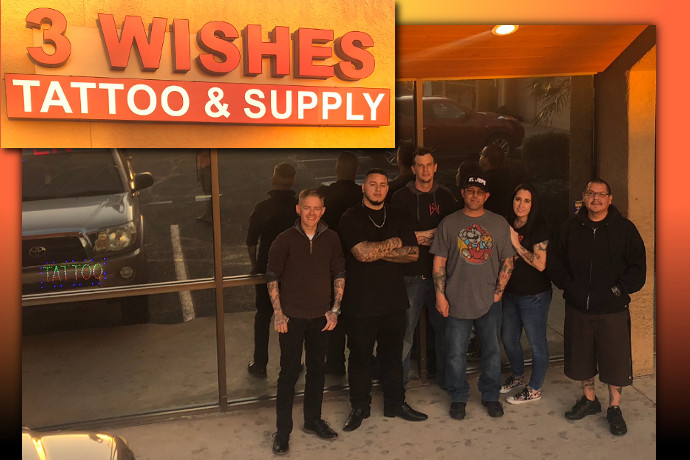 The number three has quite a legacy. There’s the tale of the three bears, the adage that the third time’s the charm and for those that have partied a little too much, they might be labeled as being three sheets to the wind. In Tucson, Arizona, the most recognizable relationship to this magical digit is 3 Wishes Tattoo —- the partnership of tattooers David Morgan and Adrian Enchinas, along with David’s wife Stacey Green, who worked to have their wish to open their own tattoo shop come true.

3 Wishes Tattoo opened in June of 2018 with tattooers Jonathan Black, Josh Daffron and Darius Thompson joining the talented crew. Davis and Adrian previously worked together at another local shop and their idea was to build a family oriented studio where artists are encouraged to share and learn and evolve their craft.

David, who also works as a fiber optics engineer to help pay the bills, is the “color guy” who excels at small, tight, colorful tattoos. Flowers are one of his favorite subjects. Adrian is a black & gray artist as is Darius. Johnathan has been doing art his entire life and was fortunate to have a mother who put him in art classes at an early age. If there’s a style he leans towards its photorealism. Josh is the “workhorse who’s really good at what he does —- and he does it all.” 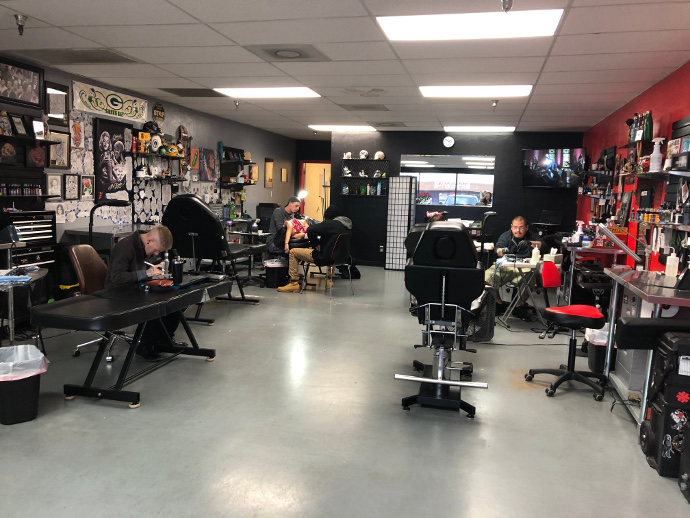 All together, there’s more than half a century of experience happening inside 3 Wishes. The open layout of the studio makes for an atmosphere of constant evolution.

David got into tattooing by the DIY route over a decade ago — ordering a tattoo kit out of a magazine, watching instructional videos and practicing at home on whoever would sit for him. He only had a couple tattoos himself, but to find out what other tattooers were doing, he got more ink and watched closely to pick up on new techniques.

With tattooers being more respected for their artistic abilities, clients are asking for more involved pieces. David sees portraits being more and more commonly requested for the simple reason that people trust that the tattoo artists can make the finished piece actually look like the person in the photos.

“A lot of times now, people will come in and ask us what we want to do and what we have drawn up,” David says. “More people are understanding these days, thanks to stuff they see on TV, what we can and can’t do with a tattoo.”

The artists at 3 Wishes work from a large pallet of Fusion, Eternal and Infiniti Pro colors and Dynamic for blacks. When it comes to machines, David relies on a Hawk rotary, Adrian uses a coil machine and LACEnano magnetic drive brushless rotary, and Darius and Jonathan work with the Bishop Magi direct drive rotary. 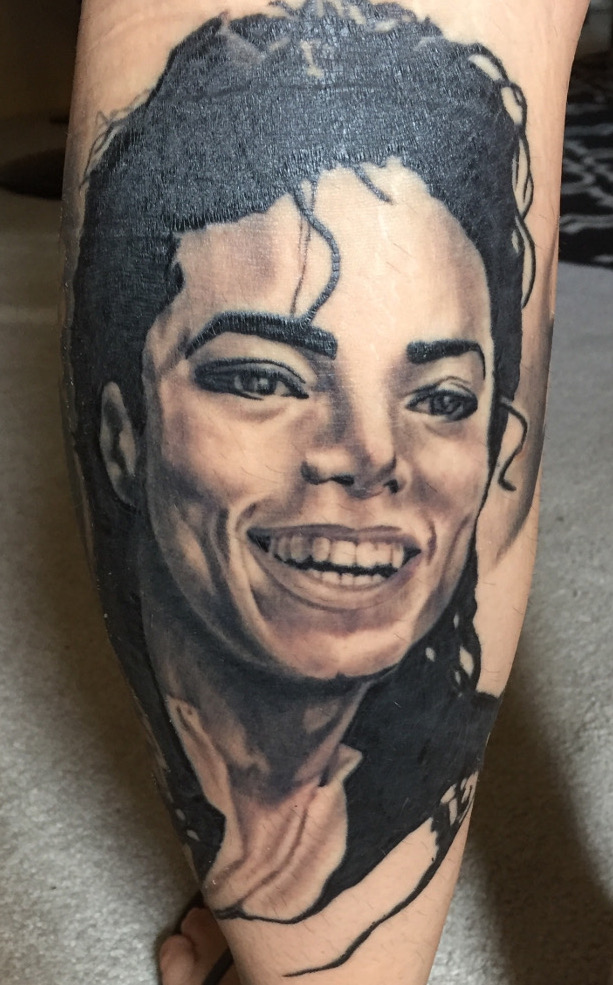 One thing you won’t find at 3 Wishes is an autoclave — they take no chances where sterility and preventing cross-contamination are concerned and go completely with disposable tubes and grips.

Running out of supplies isn’t an issue. 3 Wishes isn’t just a tattoo shop — they also have a tattoo supply side to the business that sell everything from inks and machines to medical supplies and transfer sheets.

Fusion is one of the brands of inks that 3 Wishes Tattoo Supply sells — it’s something they’ve come to trust because of its consistency from one batch to the next. They also promote and sell True Cartridge needles which David points out take the guesswork out of machine set up and tattooing.

Many of the old school tattooers have been working exclusively with the same inks and machines forever. It’s a case of if it ain’t broke, don’t fix it. But David has seen newer artists more willing to experiment with different equipment and supplies as the quality improves. Cartridge systems are one example, inks are another as more unknown brands are entering the market.

“Different companies will send us samples of their products and we’ll try them out in the shop; if they work well and we like them, we’ll definitely promote them,” David says. “We only sell products that we trust in ourselves.”

“We’re getting better equipment and better inks, more artists are entering the business and the techniques are becoming so much evolved,” David adds. “It’s a really cool time to be part of the tattoo industry.” 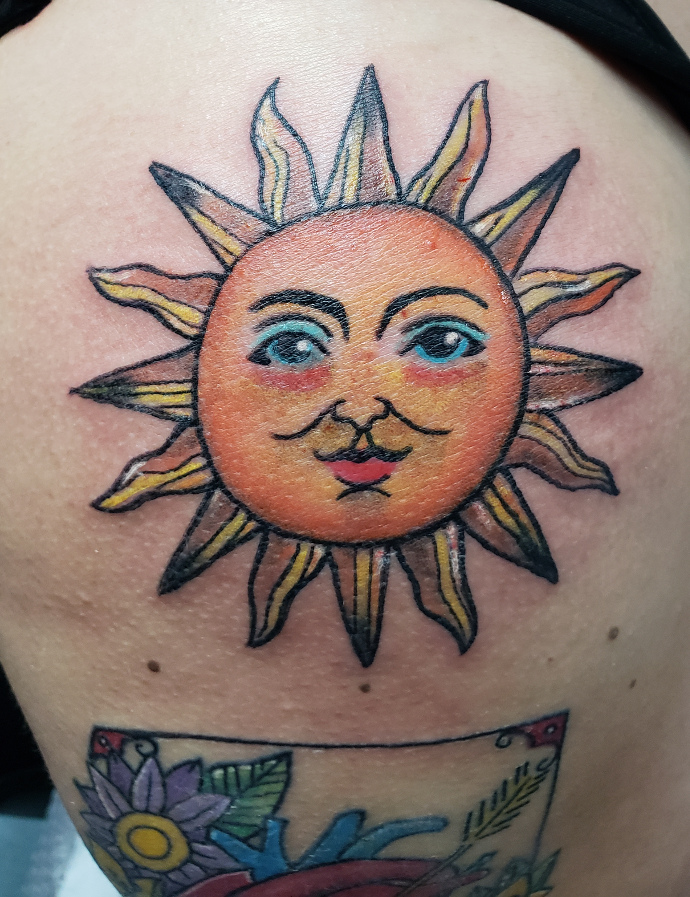 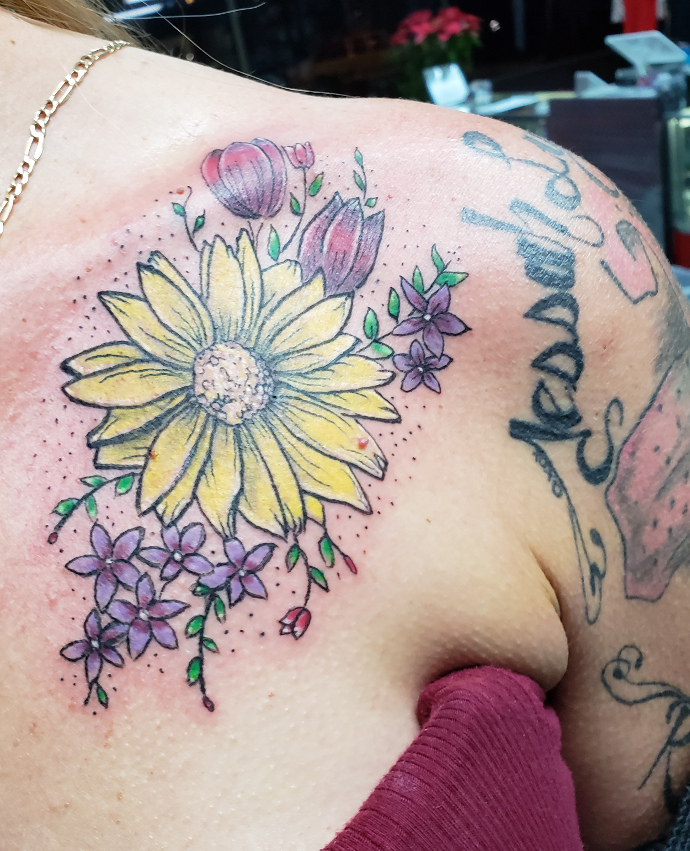 3 Wishes Tattoo Tucson, Arizona www.facebook.com/3wishestattoosupply The number three has quite a legacy. There’s the tale of the three bears, the adage that the third