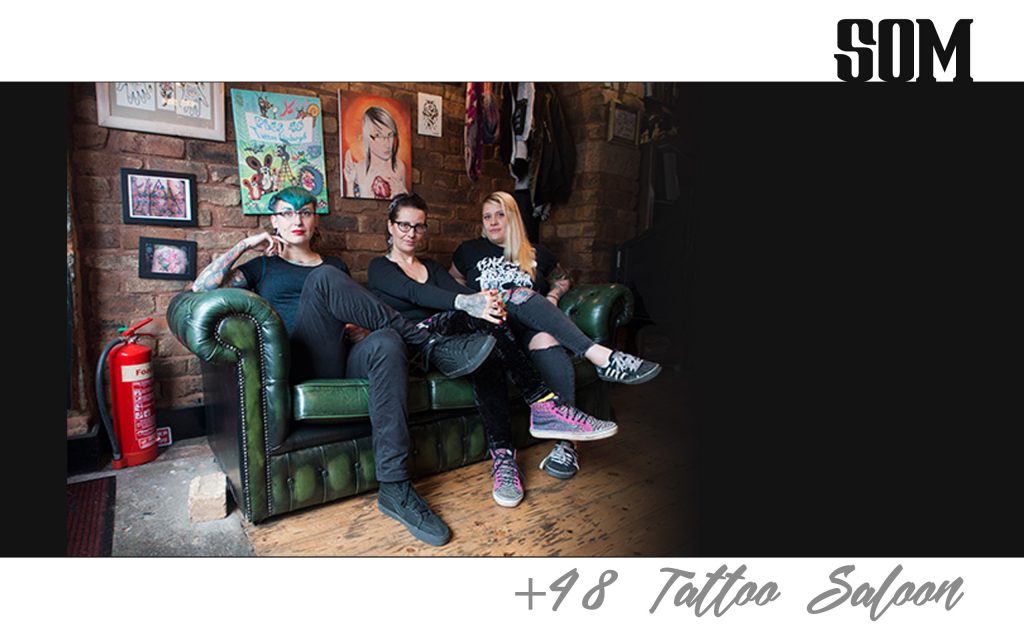 +48 Tattoo Saloon, in Edinburgh, Scotland, is a very international kind of place. It’s fitting that the name +48 refers to the calling code for Poland, the homeland of the studio’s original owner, and where its new proprietor did here artistic training.

Karolina “Kaya” Randakova, originally from Rychnov nad Kněžnou, a town in the Hradec Králové region of the Czech Republic, studied graphic design in Prague at the The Vaclav Hollar College and Secondary School of Fine Arts a state school which, for the whole period of its existence, pursues the classwork, proficiency and knowledge related to a branch of applied graphics. Randakova had been doing art since forever, but in her heart she knew she was not meant to be what she calls an “academic” type of artist

“I was always searching for what to do with my life. Every since I got my first tattoo, I wanted to be a tattoo artist,” she says. “It wasn’t easy to become a tattoo artist in the Czech Republic fifteen years ago because there weren’t very many studios, and they didn’t take apprentices. It was mostly ex-cons and soldiers who had tattoos, so it wasn’t very socially accepted.”

Randakova learned by doing – mostly on her friends, but after moving to Scotland, she found work in tattoo studios there, eventually taking over +48 from Kris Domanowski.

+48 is a custom studio (it states so right out front), and Randakova feels that it’s important for her and her fellow tattoo artists, Dominika Szymczky and Courtenay Dickson, each maintain their own unique styles. Szymczky is Polish, and has been tattooing since 2011 when she did her apprenticeship at +48 under its original owner; her specialty is black & grey realism, and her favorite themes lean toward the dark side. Dickson is Canadian and prefers neeo-traditional and old school. Randakova is always working on developing her own tattoo style, which for lack of a better word, is illustrative. “I try not to be influenced by other artists and styles,” she says.

What flash there is on display is by the artists themselves. Whenever they’re not tattooing, they working on new, original designs. If a client comes to them with an idea, they will work with them to create something uniquely personal.

“Because we are all artists, we can do freehand work as well and create designs on the spot,” Randakova says.

The studio itself has a relaxing, friendly atmosphere. There is great emphasis on sterility and hygienic standards. All tattoo studios in Scotland are visited annually by health & safety official, and +48 never has to worry about about receiving a bad mark – the majority the supplies are one-time-use disposable, other instruments go into the autoclave, and they thoroughly clean and disinfect stations following each session. On top of that, all the products used are vegan-friendly.

“It’s important that the clients leaving the studio be assured that all of the hygienic procedures were accomplished, and that their new tattoo is not only beautiful, but also clean and healthy,” Randakova says.

Tattooing is popular in Edinburgh, and on the street where +48 is located are five other studios – of course, as Randakova points out, it’s a long street, and each studio is known for something different.

“Usually people come to us because they like our work,” she says. “Many of the other studios are more ‘old school,’ while our studio is more artistic.”

“I like all the whole process of tattooing. I do a lot of drawing and paintings, and it can be a solitary process. In the tattoo studio it’s a collaborative process. When a customer comes to us with an idea, we can put everything that we feel is good for them into the design. When a customer loves the design that’s a great moment. We have a lot of fun with our customers and gain so many new friends,” Randakova says.

“The best moment,” she adds, “is when the customer leaves the studio with a smile and is happy with our work.”