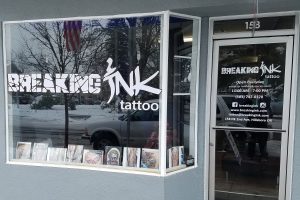 It’s a common story. Tattoo artist experiences shop practice and attitudes that don’t jive with his idea of how a professional tattoo shop should be run, so he goes out and opens his own. It’s a honorable idea, but it takes passion, talent and commitment to back it up. 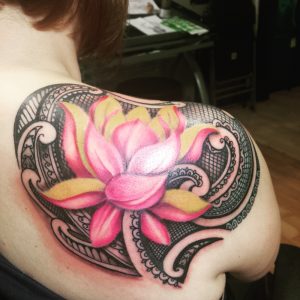 When Nick opened Breaking Ink in 2012 the name fit the mission – breaking down barriers and challenging norms. We dare to be different, it reads on their website, not simply for the sake of being different, but rather to encourage expression. We dare to expose the beauty and energy that resonates and connects us all.

Nick’s passion for drawing led him into tattooing, trying it on his own before realizing just how difficult it is to do correctly. He enrolled in a tattoo school in Portland, but upon graduation discovered that many many of the shop where he applied for a job were less than willing to take on somebody who wasn’t a rockstar. After about five years of tattooing on the side, he’d built a following to the point where he was booked out nearly a month in advance. He landed a job in a shop that left a bad taste, and inspired him – with the encouragement of his girlfriend Andrea Damian, to go into business for himself. 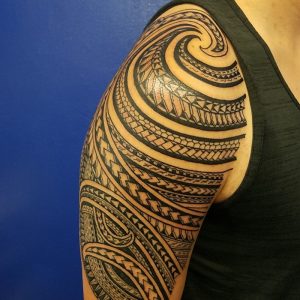 The first incarnation of Breaking Ink was a 600 sf space just large enough for Nick and one other artist. Over time, he put together a tight-knit crew of artists that now includes Matt Ostella, Brian Long and Rory Bonzai. As for styles, Matt specializes in script and black and grey, especially custom Chicano; Brian is the portrait guy with a talent for realism; and Rory, born and raised in Hawaii, is influenced by fineline Japanese. You’d think it would be the islander who’s into Polynesian, tribal and sacred geometry, but ironically, that goes to Nick, a white-guy from the Pacific Northwest.

“It’s about being able to tell a story, but more so tying people into their culture or background is what’s really important, and that’s where I get a lot of gratitude,” Nick says. “I believe in reincarnation, and the warrior spirit is something that’s transcended through every culture around the world – Polynesian, Celtic, Aztec, Native American are all symbolic to the warrior spirit.”

“Mandalas, especially, are a very meditative art,” Nick adds. “With the right placement and tension you can affect positive changes in a person’s life.”

All the styles is which Nick specializes are intricate designs, but he carefully creates them freehand. “Just like anything, when you see the crazy linework and how it goes together, it’s a layering process,” Nick says. “You start simple and build off the patterns. The fun part is that only kind of know what they’re going to look like and they come out very unique.”

With successful track record, Breaking Ink recently moved into a much larger studio. The atmosphere remains true to the initial concept. 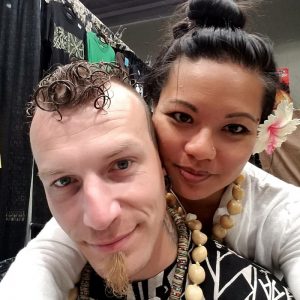 “It’s very relaxing and we’re very chill,” Nick says. “When people come to our shop, we’re honored that they’re here and allow us to do what we do for them. We see many people who are liberated after getting a tattoo, and being able to change somebody’s perspective is a blessing.

“A lot of times, we can get caught up in answering the same questions and we tend to forget how lucky we are to get a chance to serve these people, and give them not only our time, but essentially our love too.”