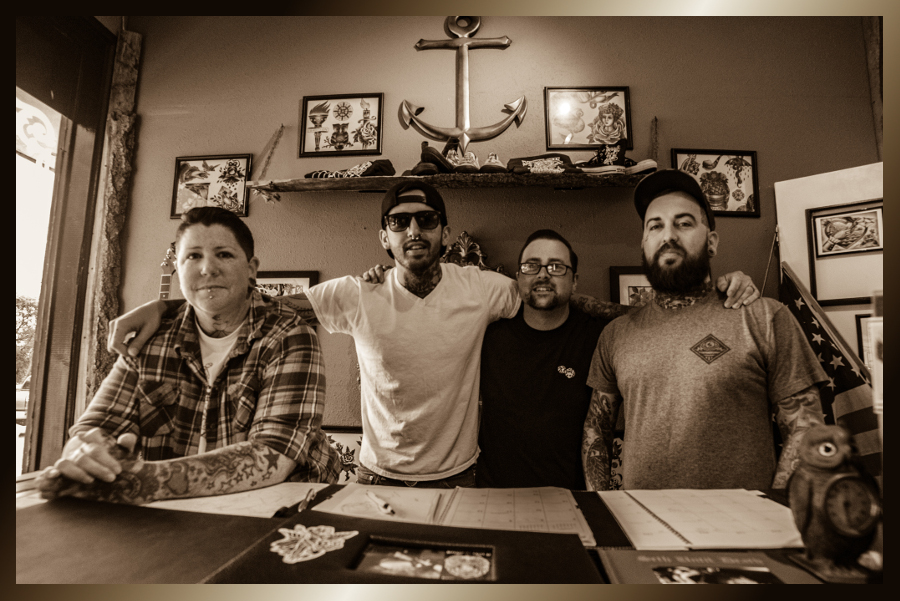 At Nite Owl Tattoo, in Oak Harbor, Washington, things are not exactly as they seem. The walls are covered with framed sheets of American traditional flash. But that doesn’t mean this is an old-school shop. Owner William Lloyd and his crew like to put their own modern twist on the classic style. 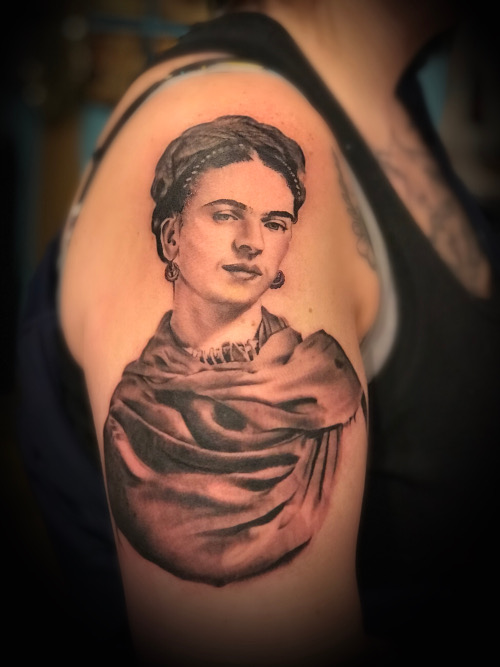 “If you look at a picture of a traditional tattoo it seems so basic and simple — it looks easy, but that’s what makes it incredibly difficult,” who opened Nite Owl in 2012, on Whidbey Island in Puget Sound, north of Seattle.

Lloyd was introduced to tattooing back in high school when he would hang out at his friend’s pop’s shop back when it was actually illegal to tattoo on the island. His apprenticeship was certainly old school – cleaning tubes, organizing, drawing and other chores, and that’s where he gained an appreciation for the kind of tattoos that stand the test of time.

“Over time, most tattoos are going to fade and the lines are going to swell out. But with traditional, the colors are saturated into the skin, so it will have the longest lifetime,” Lloyd says.

There are definitely dynamics to traditional. But according to Lloyd, the rules nowadays are a lot looser.

“I really like the to put twists on art from old school tattooers, like Bert Grimm, Sailor Jerry and Cap Coleman, and bring the style into the modern age,” he says. 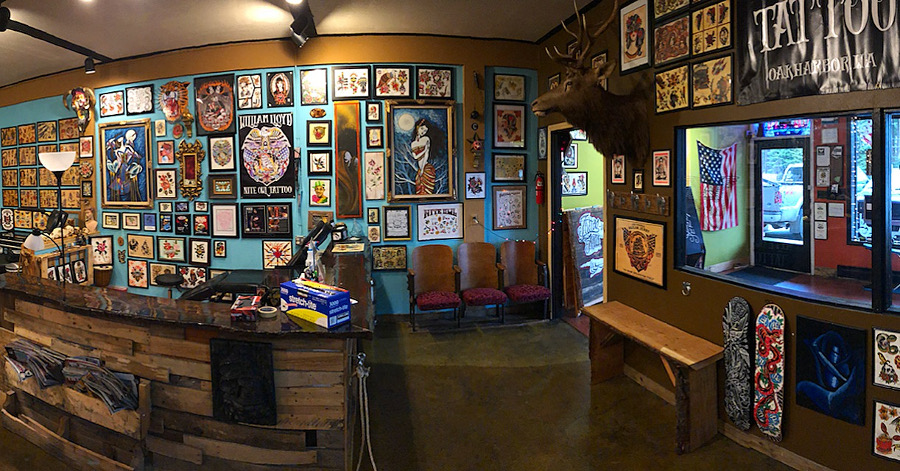 “I think they were limited back in their day. Like with some of the line work, you can tell exactly what it is, but it just need to be freshened up,” he adds. “It’s kind of like if somebody were to come in with a tattoo idea, I would draw over that tattoo idea to make it my own. I try and do the same with all the older stuff.”

Check out the portfolios at the shop and you’ll have no trouble seeing the well-rounded talents of Lloyd and his fellow artists – Molly Vigallon, Seth Smith and Joshua Jay. In the traditional, you’ll find tried and true designs ranging from nautical to roses and flaming hearts. You’ll also see Star Wars and pop culture inspired pieces. Anything, Lloyd says, can be turned into traditional with the right touch. 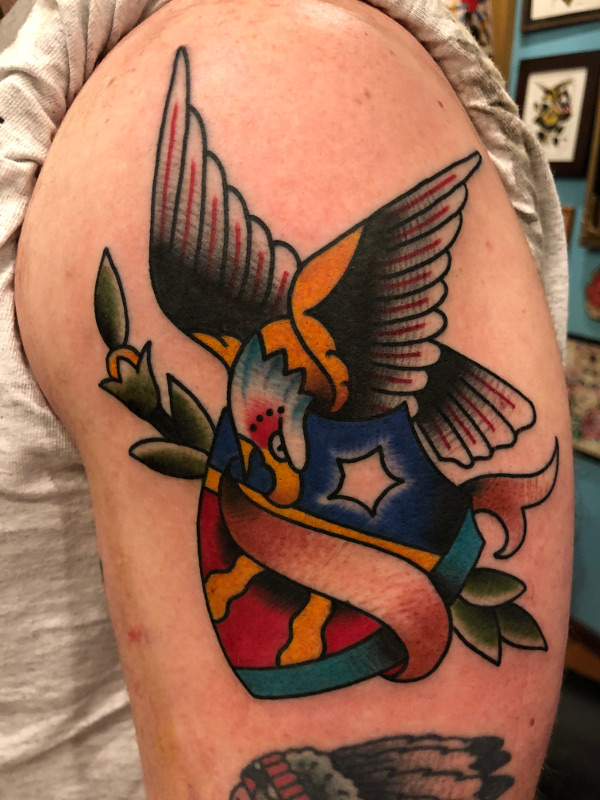 “The hard part about drawing is turning your brain off and just drawing,” he says. “If you put too much into it, it’s not going to look like a typical traditional tattoo. It’s best to keep it basic.”

Typical traditional uses only a few colors, but Lloyd might pick from a dozen or more. Then again, just because a traditional tattoo is traditionally colored, doesn’t mean that it can’t simply be black and grey. B&G is another of Lloyd’s favorite techniques, and he’s not afraid to fuse the two styles.

“Normally you don’t put a gray wash in traditional tattooing, but it can be done, and it can look great,” he says. “I like it to have more contrast; so more black, then softer shading because that’s what’s going to hold it together.”

When it comes to ink, Lloyd has a preference for Eternal, but every brand has its best colors, and on the trays at Nite Owl, you’ll also find, Fusion, Dynamic, Intenze, and Waverly. As for machines, Lloyd sticks with good old fashioned coils that he says work especially well with the traditional style tattoos. 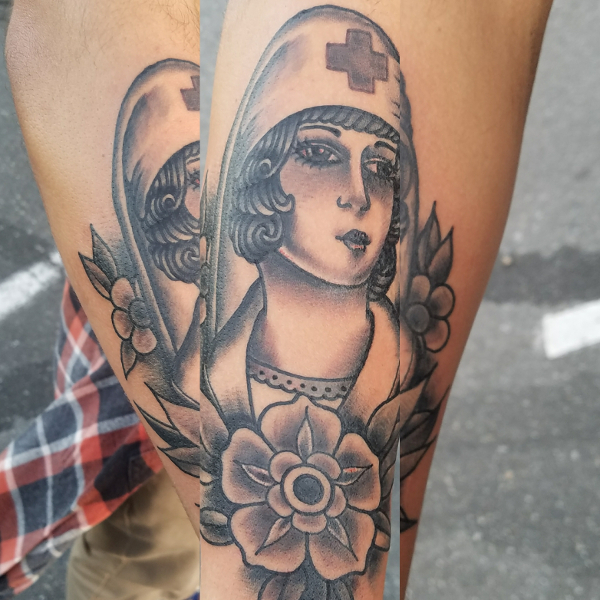 “I go off the feeling in my hand and the sound of the machine to know If I’m getting a good line or if I’m bouncing off the skin. I use my senses to make sure that my machine is working correctly and my needles are gliding properly.”

For the last five years, Lloyd has used the same machine, made by Adam Rosenthal at River City Machinery, for 95 percent of his tattoos. “I’ve never really had to retune it,” he says.

The Nite Owl crew travels to expos as frequently as their schedules allow. Not only do they meet and work with new clients, they’re also excited to be able to kick it with other tattoo artists who they admire. Another big part of going to a show is having your work critiqued in the daily competitions. Yes, they’ve got Best of Show and Best of Tattoo for the day trophies, but what really counts is the opportunity to further their art.

“Even if you don’t win anything, you’re getting your tattoos out there for people to see. It’s really awesome to get constructive criticism from the judges, who are usually heavy hitters. That’s feedback we can put towards making a better tattoo,” Lloyd says.

And as for American Traditional? “It’s never going to go away. It’s continually growing because people are pushing the limits of what can be traditional and what’s excepted.”