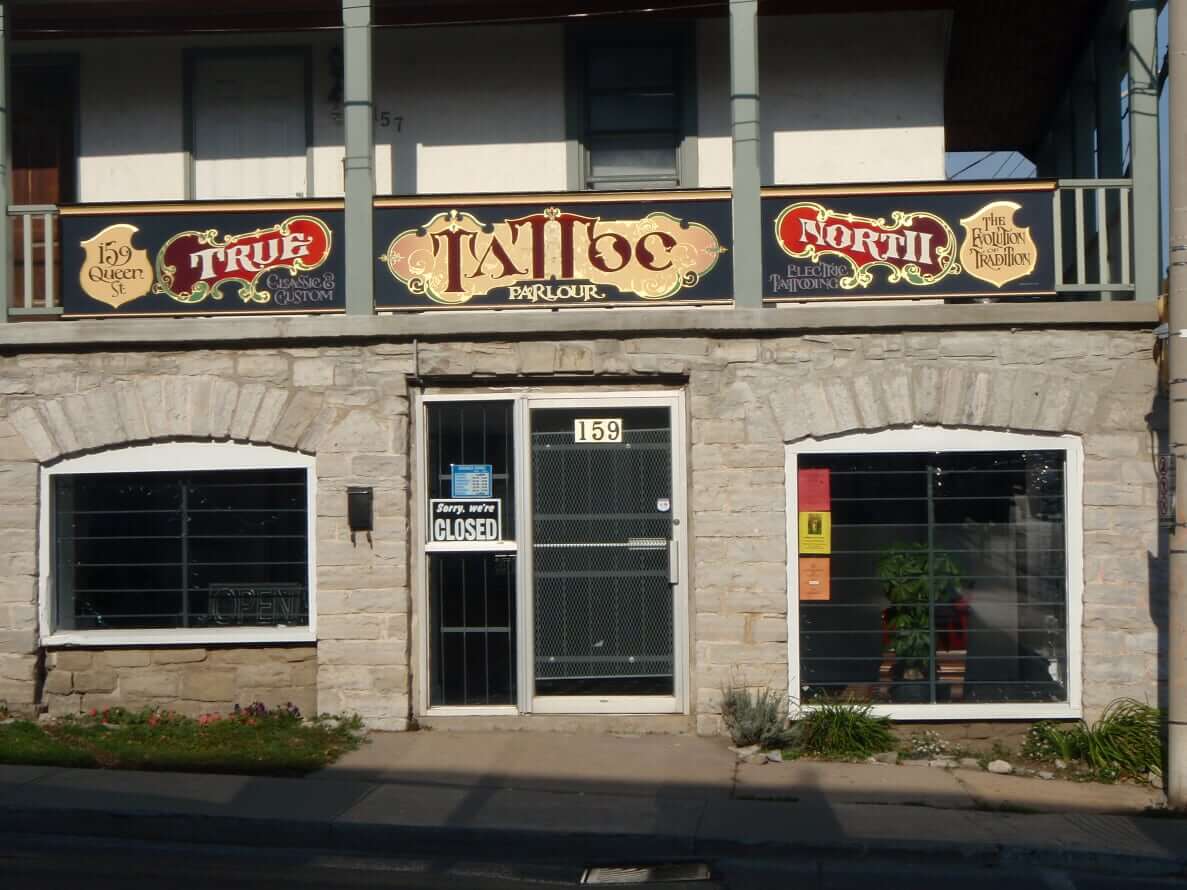 True North Tattoo is a Sterile Environment—But Also, it Isn’t.

Were we having this conversation in Wayne Murrill’s home state of Missouri, his words here likely wouldn’t have been given a second thought. But we’re in Kingston, Ontario—and that changes everything.

The Tragically Hip may have been little more than a footnote in the U.S., but in Canada, they’re only slightly less popular than Tim Horton’s Coffee. He may as well have yelled “Roll tide,” at an LSU home game. But our American expat friend is perhaps saved by the fact that we’re inside True North Tattoo, the critically acclaimed Kingston ink destination he’s owned and operated now for a full decade. Think of it as his personal embassy. He’s not in the clear entirely, though. He may have started solo ten years ago, but he has five employees now, three of whom are on the clock as we speak.

“You’re playing with fire, Wayne!” a voice breaks in from across the parlor. Everyone laughs. On the whole, our conversation is of the “A, B” variety, but with a client in Wayne’s chair and only pony walls subdividing the space, we frequently drift into an alphabet soup scenario. The hum of one lone coil serves as the base.

Fortunately, Wayne is using a rotary today, which means that tomorrow when I go back and listen to the interview recording, I’ll actually be able to make out what he’s saying. That’s a relief, since he has no shortage of thoughts on any subject we broach. One day, someone should publish a coffee table book of ‘Wayne-isms,’ and place them in the foyers of tattoo parlors like Gideon Bibles. I think we’d all benefit.

“I like to try and keep the tattoo shop feel,” he says when I point out the atmosphere he’s created. “I don’t want to run a salon. I really don’t. If you’re easily offended,” he exaggerates a shrug, “I mean—you’re in a tattoo shop. We’re nice people, but we’re not going to sterilize the environment.”

He frowns thoughtfully. “Well, we will sterilize it, but . . . you get my point.”

Back to his choice of machines, though. Admittedly, seeing him with a rotary is more than a little surprising. After all, we’re talking about a 26-year veteran of the trade whose first several tattoos were punk band logos and anarchy symbols of the scratch and poke variety. There are just certain expectations of such an individual. He’s not oblivious to this.

“I was nervous about you taking photographs today,” he tells me with a wry half-smile. “I didn’t want evidence of me not using a coil getting out and ruining my reputation.” 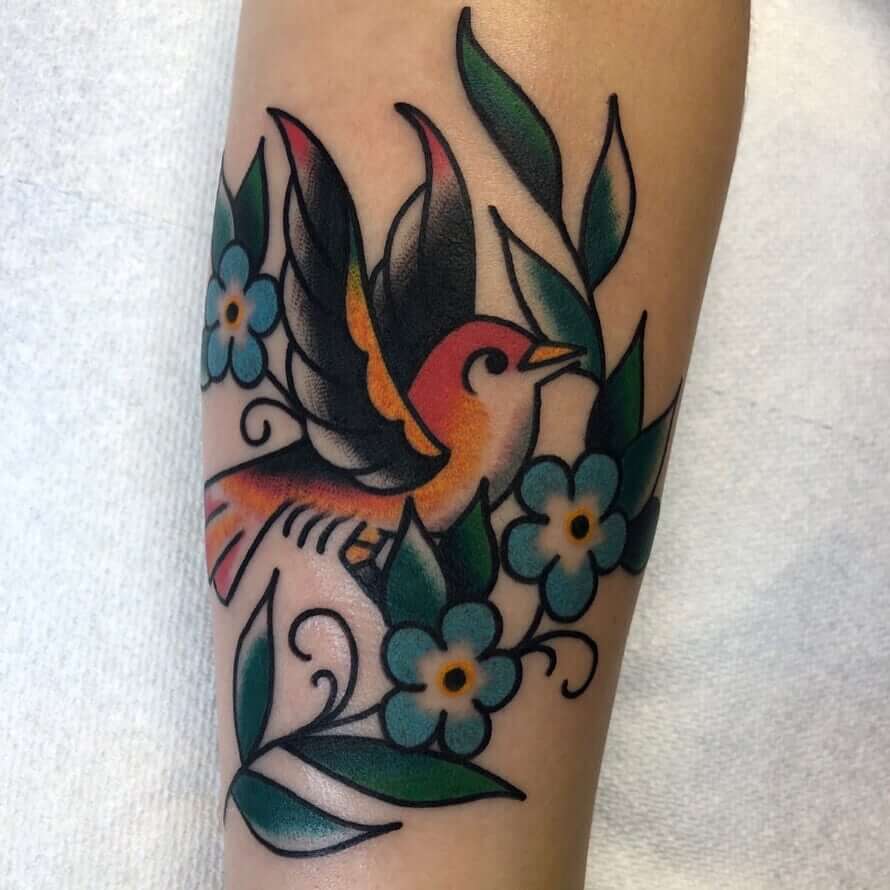 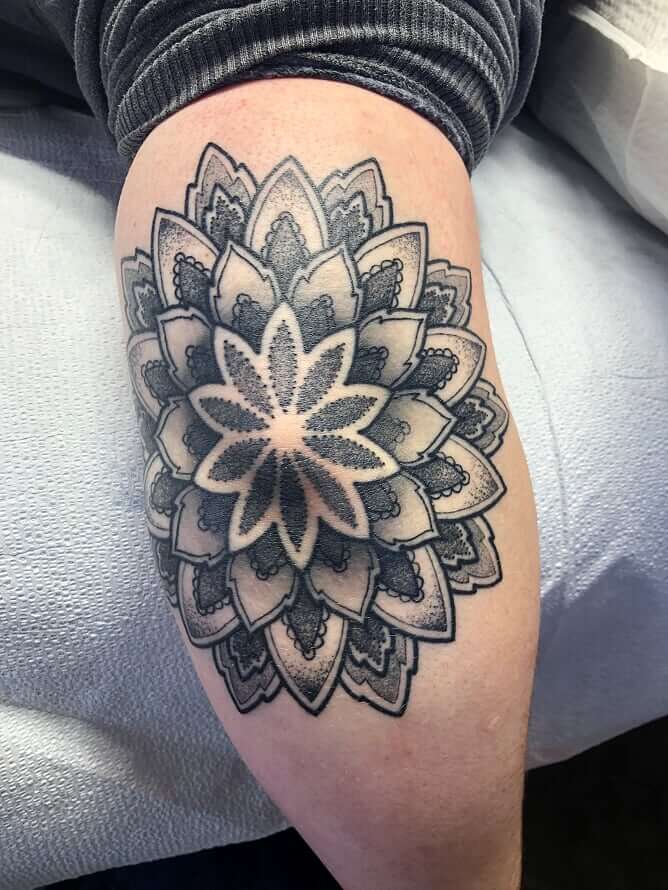 There’s a refreshing self-awareness about him, as illustrated by the above comment. That punk ethos of his youth is still there, but now, with more salt than pepper in his hair, it manifests as a sort of DIY wisdom. Neither a curmudgeon, nor flotsam governed by the current, he crafts his opinions through the careful analysis of his observations, which are shaded ever so slightly by a playful contrarianism. And though he is undoubtedly opinionated, those opinions are flexible and not without a measure of humility.

“In my mind, I’m kind of a newcomer to tattooing,” he says. “There was a big influx of new tattooers in the early nineties and I feel like an interloper in that regard. Back then, it was a very small community. Now, it’s a completely different animal. I don’t even recognize it.” A touch of regret tinges his words, but he’s quick to acknowledge the positive developments.

“There’s a fresh batch of talent coming in,” he offers. “Just by the sheer volume, you’re going to get innovation. You’re going to get people pushing the envelope . . . people developing new directions.” There are drawbacks, though.

“The real negatives I see have more to do with the homogenization of tattooing. Thanks to platforms like Instagram and Google . . . more and more tattooers’ work is starting to look like other tattooers’ work.”

“For instance,” he says, pointing to his client’s arm. “What I’m doing here, a koi; if you have ten people all looking at the same koi image, they’re all going to have similar results. But if one of those ten is looking at photographs of koi fish, he’s bound to bring a more personal flair to the drawing because he’s interpreting the actual thing as opposed to interpreting an interpretation of the thing. When I started, we actually went to the library to find references for tattoo drawings.”

“Also, when I started,” he adds, “people came in knowing what they wanted. Or they’d pick something off the wall, which is another thing that’s going away. It’s unfortunate.”

Unfortunate? I didn’t see that one coming. Alright, I’ll bite. I ask him to elaborate.

“It’s just a different experience,” he explains, “a different process. It’s kind of like Google on the walls of a tattoo shop in a way, but it was drawn or painted by the guy who works there . . . by a tattooer, with the intention of it being tattooed. So they’re premade, prepackaged tattoos, ready to go. You get people who come in and they want some idea that’s difficult to grapple with . . . you work with it as best you can to realize their vision, but at the end of the day, a panther head is fucking awesome.” There’s just no way to replicate his delivery of this line in print—and that’s a shame, really, because everyone here is laughing.

“That being said,” he goes on, still chuckling, “I draw all the tattoos I do . . . And I don’t repeat anything I’ve drawn. They’re all custom. I’m just bitching.”

Our time together is winding down. As a tradition, I make it a point to close out each interview I conduct by giving my subject the floor to say whatever happens to be on their mind, whether it’s a word of advice, a thank you, or maybe the answer to a question I should have asked, but didn’t. Sometimes the result is just a bunch of stutters and stumbles. Sometimes it’s a work of brilliance. This time, it’s . . . well . . . Wayne.

“To all those people out there who are thinking about tattooing for a living, I actually have not had sex once since I started tattooing, I make three hundred dollars a week, all my friends hate me, and my penis fell off.”