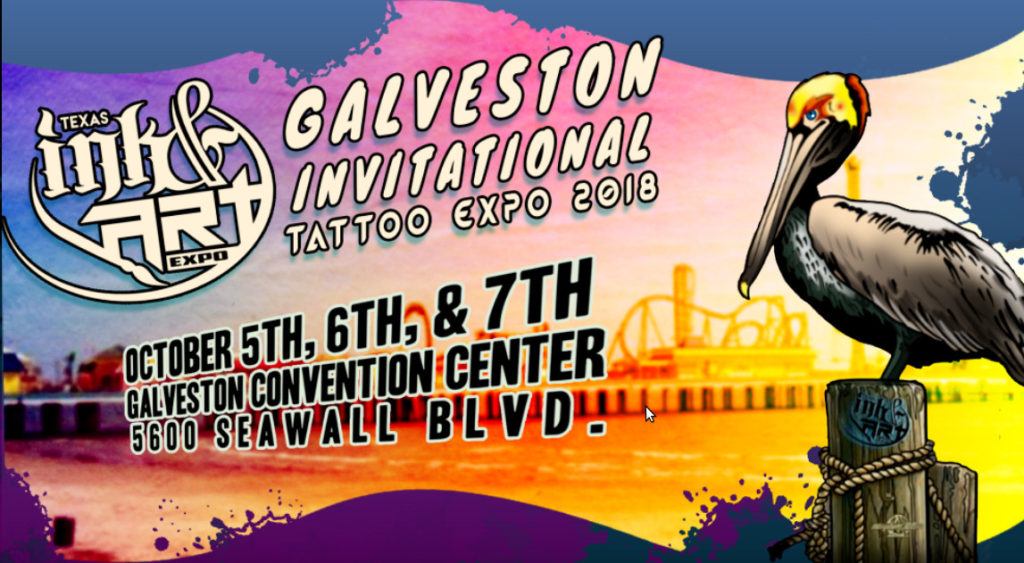 It’s a family affair for everyone involved with the Galveston Invitational Tattoo Expo.

Kami and Joe are the founders of Texas Ink & Art Expo which stages annual shows in Galveston and Fort Worth. Now in its seventh year, the Galveston expo has become a big reunion with artists and vendors returning to the show every year. Many of the artists, even though their shops are unrelated, are known to join up in one gigantic booth so they can all hang out and work together. 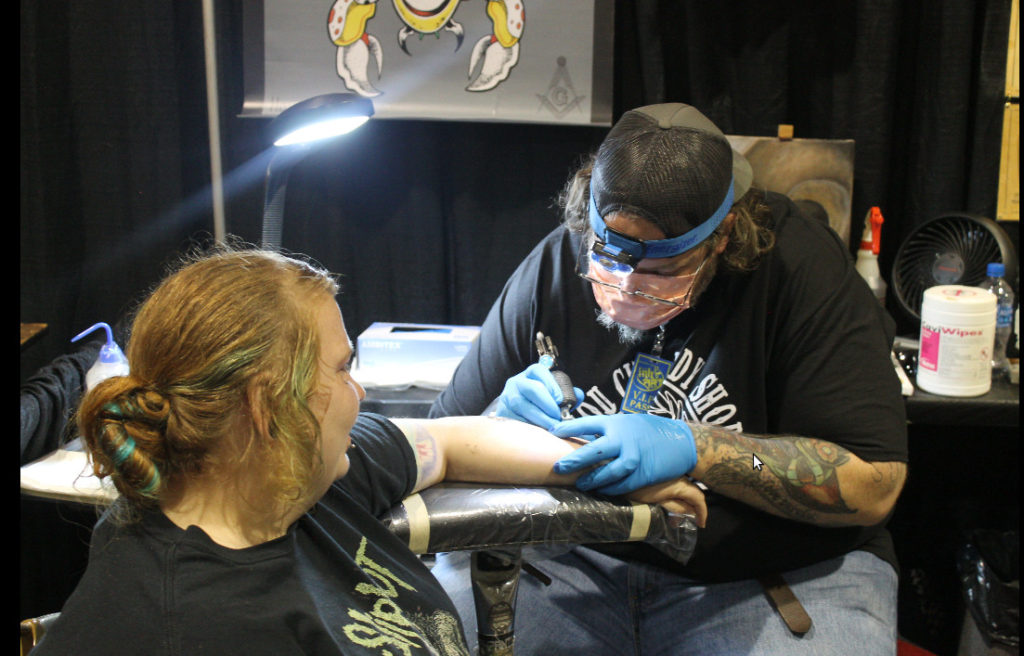 As the name implies, the Galveston expo is open to artists by invitation only. The promotors like to keep the number small — this year there were some 70 tattooers and piercers. The show sells out months in advance, and while Kami says the popularity of the event has presented the opportunity for growth, they like things just as they are.

“We want to make sure that the public supports the artists that are there, and for artists to be happy and to be making money,” Kami says.

One way they reward the artists is by awarding more than 70 trophies in the daily tattoo contests in categories ranging from Best Nautical and Best Movie Character to Best Cover-up and Best Patriotic. There’s even a place for Best Piercing Project. A thousand dollar cash prize goes to Best of Show which are judged from all the tattoos that have won their individual categories as well as the winners of tattoo of the day. It’s not just a popularity contest either — the judges are all professional tattooers and they take their role seriously. 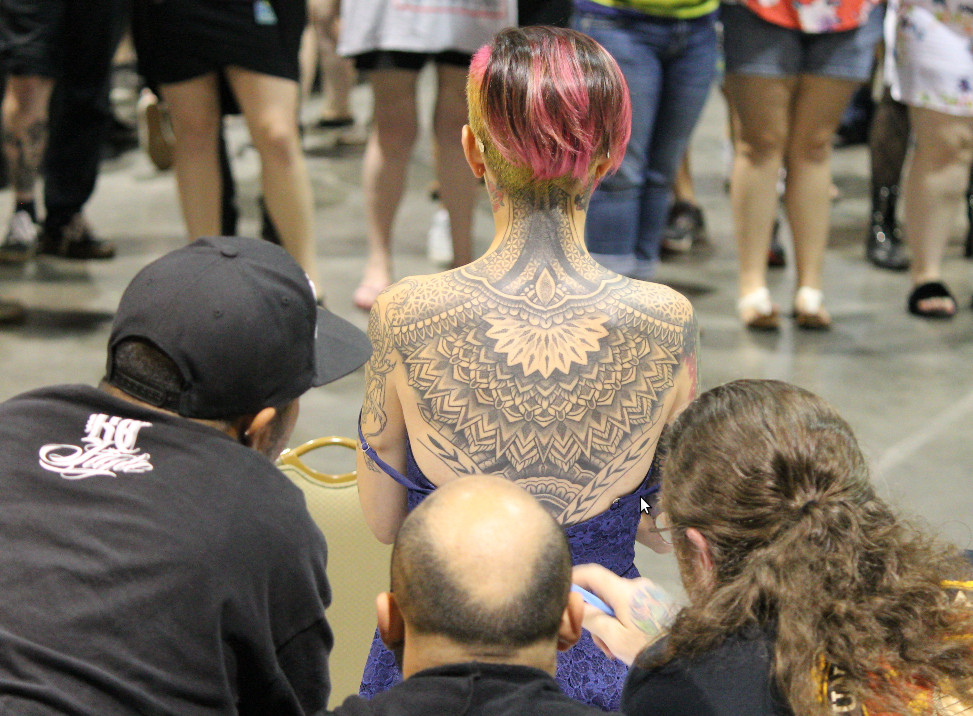 Up-and-comer Cristyan Medina, from Imperial Tattoo Co, in Sugar Land, Tx, earned the big check for Best of Show. It was an even sweeter win in that he beat out his mentor and boss Tony Wayne for the trophy. “He’s only been tattooing for a little over a year now,” says Tony, “and I’m super proud of the kid.”

Tattoo artists came not only from across Texas, but also from exotic locales such as Iowa, Nebraska and Wisconsin. “We want to showcase a wide variety of styles, and we have that — everything from black & gray to traditional and full-color realism,” Kami says.

Sometimes the smallest tattoos make the biggest impact. A $20 donation got you an animal tattoo with all the proceeds going to the Galveston Humane Society.

One of the most unusual spectacles was a suspension wedding. Dustin Mathis of The Captain’s Sideshow performed the nuptials. The bride wore a black wedding dress and the groom in a black shirt and pants. Guests watched as the couple 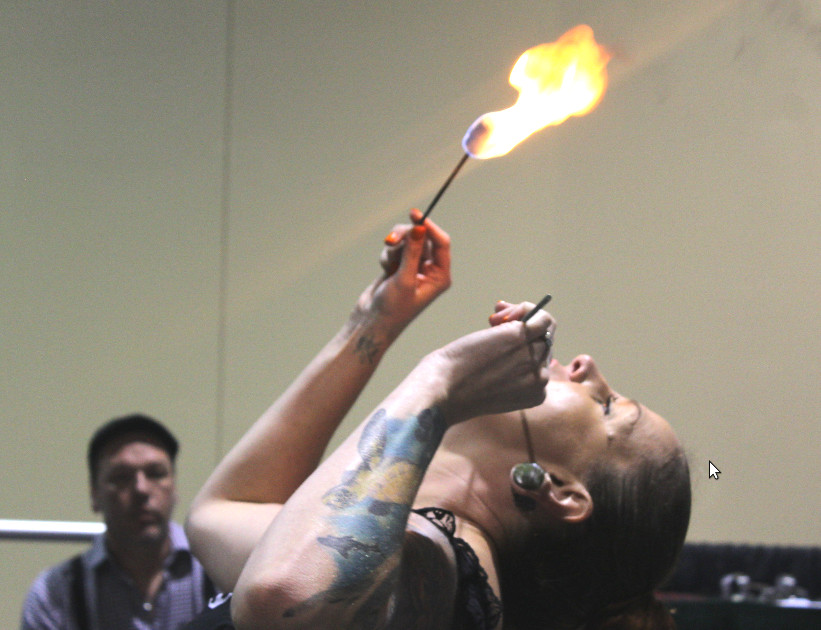 said their I-Dos and then rose up into the air on a double suspension. There was also a first-time suspension that happened, with a young lady swinging around as the crowd applauded (and gasped at her bravery).

Kingpin Tattoo Supply was the major sponsor. They donated all of the supplies for the Humane Society tattoos as well as making supplies available to the working artists at the show. Vendors at the show included Vitalitree aftercare products, Industrial Ink, Aztlan Arts, and even the local comic book shop, Lone Star Heroes.

“It’s all about the artists and the tattoo culture,” Kami adds. “We’re the local bad ass artists who are trying to get our work out there, network, learn from each other and have fun.”