If you’re going to stage a tattoo convention, what more inspiring location could there be than the beautiful island of Hawaii — for six years now, Honolulu has been home to the Pacific Ink & Art Expo. According to co-founder Kevin Read, the three day event held the first weekend of August just gets bigger and better like a perfect wave.

“We’ve never had a year that wasn’t special,” says Read, who puts on the show with partners Greg Frey, Tama Hall, and Danny Casler.

A tattoo expo in Hawaii wouldn’t be complete without showcasing the best in traditional tattooing of the Pacific Islands. Among those representing there native culture were Hawaiian tattooist, Keli’i Makua, recognized as “Kahuna Ka Uhi” (Priest of Tattooing), master tattooist and a native to Samoa, Su’a Peter Suluape, who is the son of renowned Samoan traditional tattoo artist, Su’a Suluape Petelo Alaiva’a, and Keone Nunues, a traditional Hawaiian tatau practitioner who uses the traditional Polynesian “tapping” method with his own handmade moli (tattoo tool) and pa’u (ink).

“It’s a very unique show because it’s such a culturally driven show,” Read says, “it was awesome to get everyone together to show their version of tatau or tattooing.”

The sixth annual Pacific Ink & Art Expo hosted a record 412 artists – so many so that organizers had to break down their popular skateboard and BMX ramp to make room for all the booths. As you’d expect almost half of the artists were Kama’aina (from the islands), but also represented was the mainland U.S., China, Germany, and Amsterdam.

The idea behind “ink and art” is to showcase more of the tattoo culture and artistry than what comes out of a common street shop. Nothing against old school street shops, as Read owns two of those himself, and Lyle Tuttle was also in attendance, but as Read says, there’s a new breed of actual “artists” creating an entirely new art form. 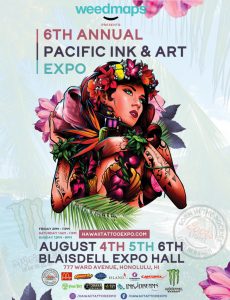 When the show first got underway, the idea was to focus on Polynesian style tattooing to educate tattoo fans and artists alike about correct usage of the designs. It was and still is about promoting the tattoo talent from the Aloha State – not simply Polynesian, but every style of tattooing from realism to American traditional.

“There are some unreal tattoo artists in Hawaii and nobody has ever heard of them because they’ve never left the island,” Read says.

“I’ve been to tattoo conventions all over the world, and I don’t know if it’s because we’re on an island surrounded by nothing but ocean,” Read says, “but there is always a great vibe (at Pacific Ink & Art Expo) and every one is smiling.”

We, Jaymi Britten & Melissa Kumano, own the copyright to these photos of the Pacific ink and Art Expo and we grant permission to the Honolulu Star Advertiser for use, including print, online and social media.